The sixteenth international conference on X-ray Absorption Spectroscopy XAFS16 took place between 23rd and 28th August 2015 in Karlsruhe. Since the first such meeting in 1981 the XAFS conference series has become the foremost international meeting covering developments and applications in X-ray spectroscopy. Jointly organized by KIT, DESY (Hamburg), HZB (Berlin), and the European XFEL (Hamburg) the XAFS16 conference hosted over 500 participants (including 100 young scientists) from 37 different countries, establishing a new record for the number of participants. The local organization was provided by ANKA, INE and ITCP at KIT, with Professor J.-D. Grundwaldt leading the organizing local committee.

The symposia and accompanying poster sessions addressed virtually all aspects of X-ray absorption spectroscopy – from the latest theoretical developments to instrumentation and applications – covering topics from the in situ characterisation of catalytic reaction processes, environmental and actinide metal speciation, to novel developments in medical applications and forensic analysis of cultural and historical objects. The important role that X-ray absorption spectroscopy has traditionally played in industrial use of synchrotrons was reflected in a special symposium dedicated to current and potential applications in industrial research.

In addition to the main conference a number of satellite meetings covering specialist topics were held at DESY (data acquisition, treatment, storage and quality assurance in XAFS spectroscopy), HZB (Time and energy-resolved soft X-ray spectroscopy) and at the MPI-IS in Stuttgart (Application of XAFS to the study of magnetic materials).

The International X-ray Absorption Society (IXAS) used the occasion of the XAFS16 conference to honour a number of scientists whose activities have contributed to the continued development of X-ray absorption spectroscopy: the Edward Stern Prize was awarded jointly to Professors Majed Chergui (for his pioneering work in the field of time-resolved X-ray absorption spectroscopy) and Andrea Di Cicco (for outstanding achievements and pioneering work in the application of XAS to disordered systems). Dr Amélie Juhin of the French National Centre for Scientific Research in Paris received the Farrel Lytle Prize for her contribution to the understanding of x-ray dichroism and resonant inelastic x-ray scattering, and the Dale Sayers Prize for outstanding young scientists went to Dr. Narcizo Souza-Neto. (The awards are named after three founding-fathers of XAFS whose work from the 1970s made the practical use of X-ray absorption spectroscopy possible.) 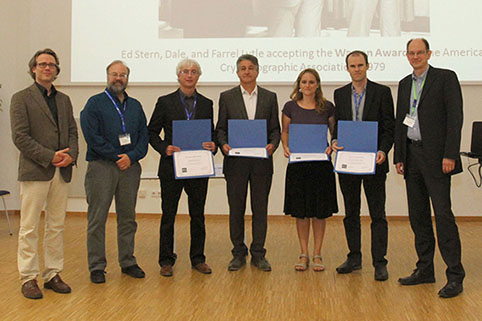 At the conclusion of the conference the participants had the opportunity to visit the ANKA synchrotron facility at KIT north campus, where there are currently three beamlines dedicated to X-ray spectroscopy and where the CAT-ACT beamline for catalyst and actinide research is currently being installed.

In the closing presentations the hosts of the next conference, XAFS17, which will take place in Krakow, Poland in 2018 were introduced. In his closing remarks Bruce Bunker, outgoing president of the International XAFS Committee IXAS praised "the best-organized XAFS conference in many years" and congratulated the local organizers for "a great job for both the scientific program and logistics.”