Nanoparticle synthesis by pulsed laser ablation is a clean, environmentally friendly process to produce nanoparticles suspended in liquid for a wide variety of materials. Nevertheless, the individual steps and properties such as size distribution and chemical valency which lead to material formation,  are interconnected in a hierarchical process. We have employed in situ X-ray probe methods with high time resolution on the microsecond scale to disentangle the different mechanisms. In particular, zinc and its final product in suspension, zinc oxide are interesting for catalytic or photonic applications.

X-ray imaging with the recently developed dark-field technique using a Shack-Hartmann setup at the UFO instrument at KARA [1] has confirmed the current understanding that during ablation nanoparticles are produced inside a cavitation bubble in the liquid and are confined by this bubble [2].

Using energy-dispersive X-ray absorption at ESRF (beamline ID24) it was also possible for the first time to address the quantitative mass production and the chemical speciation. The first interesting result is that the immediate product of ablation close to the zinc target consists of nanoparticles which are still metallic despite the harsh reaction conditions [3]. Oxidation is only observed after some 20 milliseconds, when the particles have entered the liquid phase. 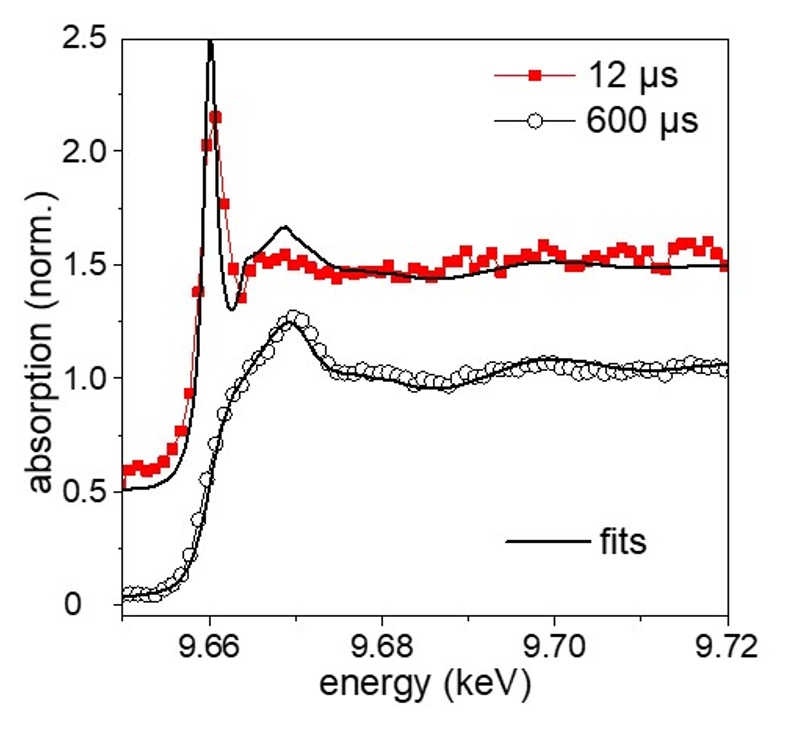 Fig. 1: Selected X-ray absorption spectra at different delays after laser impact on the target, together with the fit from a linear combination of vapor, oxide and metallic zinc reference spectra. The intense pre-peak line at 9.662 keV is a unique signature of the atomic state.

In addition we observe a spectral signature at the earliest time delay, which resembles isolated zinc atoms in a vapor. It is known that during the ablation with intense nanosecond laser pulses the target material can be both evaporated and spallated, that is, a phase decomposition into vapor and liquid condensed phase occurring [2,4]. Therefore, nanoparticles are produced from the beginning, but a large fraction of the mass in the present case is found as isolated atoms or few-atom clusters.

Fig. 2: a) Snapshot of a vapor bubble inside water during ablation of a zinc wire (bottom). The yellow dot marks the measurement position for X-ray absorption spectroscopy. b) Distribution of the chemical species as a function of delay after laser impact, isolated species as black bullets and zinc oxide (ZnO) as red squares. Metallic zinc (not shown) makes up the remaining mass fraction. Oxidation only sets in after some 10-20 milliseconds, while the bubble lifetime is < 300 µs.