A group of 25 undergraduate students enrolled at the Materials Science and Engineering Department of the French elite university "Ecole Nationale Supérieure des Mines de Nancy" in Karlsruhe’s sister city took the opportunity to visit the KIT synchrotron radiation facility ANKA on the way back home from a one week excursion to several German research institutions. The group was accompanied by three supervisors, headed by Dr. Marc Ponçot, assistant professor at the Ecole des Mines and the Université de Lorraine in Nancy.

A half day scientific program including lectures and an extended tour of the ANKA accelerator facilities, beamlines and laboratories was organized by scientists from the KIT Institute for Nuclear Waste Disposal (INE) and Institute for Accelerator Physics and Technology (IBPT), which is operating the ANKA storage ring and developing accelerator technologies for a future generation of synchrotron light sources.
After a short introduction into KIT and its research portfolio, the little symposium on synchrotron technology and applications was opened by Patrik Schönfeldt, PhD student at IBPT, on “Accelerator Research at KIT-IBPT and ANKA”,  followed by two INE contributions - an “Introduction to X-ray Absorption Spectroscopy” by Jörg Rothe and a “XAS investigation of the retention of radionuclides by secondary phases” by Nicolas Finck. The latter lecture was highlighting the important role of synchrotron based XAS techniques to understand the behavior of radionuclides in a future nuclear waste repository. The last presentation was given by Martin Börner from the Institute of Microstructure Technology (IMT), an “Introduction to X-ray lithography with synchrotron radiation”. In this talk it was emphasized that the need to have all steps of the LIGA microfabrication technology - where IMT and its spin off companies are currently market leaders - on site at Campus North was the original motivation to establish the ANKA light source in Karlsruhe.
Following this overview on different research fields at KIT which are strongly depending on the bright X-rays delivered by ANKA, an extended tour of the facility gave the opportunity for discussions with experts at beamlines and associated laboratories. The visit of the French guests ended with a joint lunch in the Campus North canteen.

Special thanks to Bärbel Krause (IPS) and Tonya Vitova (INE) who supported the ANKA tour. 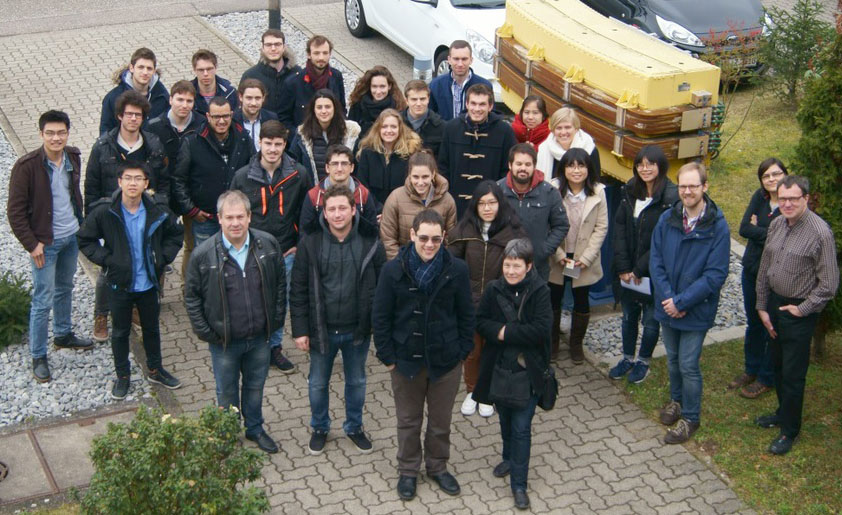 The guest from Nancy and the tour guides assembled for a group photo in front of the ANKA building.