Sulfur compounds play an important role in a large number of applied materials systems. They are used for example as active materials in lithium-sulfur batteries, in cadmium-telluride and copper-gallium/indium based thin-film solar cells, and in metal sulfide catalysts such as iron, copper and cobalt sulphides. They also have high relevance in geology, the coal and oil industries, and many other fields.

These materials systems are often exposed to environments containing oxygen and/or humidity, possibly under illumination, which can lead to the formation of sulfate phases. It is important to detect and characterize these phases, since they can affect the device performance. For example, in experiments that investigate the long-term stability of the cells, sulfate formation can be observed for Cu(In,Ga)(S,Se)2 thin-film solar cells after exposure to humidity and light.

To understand and optimize these materials, a detailed knowledge of their chemical structures (including secondary phases), surface phases, diffusion processes in multilayer structures, and surface stability, is important. This calls for a thorough characterization of the different sulfur-containing phases in the material, in particular as a function of external parameters under operating conditions.

To analyze the electronic and chemical structures of sulfur compounds with bulk sensitivity, X-ray spectroscopy techniques are a uniquely suited choice. Most commonly, the sulfur K edge has been investigated using both X-ray absorption (XAS) and emission spectroscopy (XES). The information content of XES is significantly increased when investigating transitions involving valence states, i.e., for S Kβ (probing states with p symmetry) and S L2,3 (probing states with s and d symmetries).  In addition to the observed chemical line shifts, the spectral shapes now vary for different compounds, offering high sensitivity for the differentiation of sulfur compounds. Together with the appropriate photon attenuation lengths in the soft X-ray range, this makes S L2,3 XES a very versatile technique for the investigation of fundamental and applied material systems like thin-film solar cells, CdS nanoparticles or CdS/ZnSe superlattices. 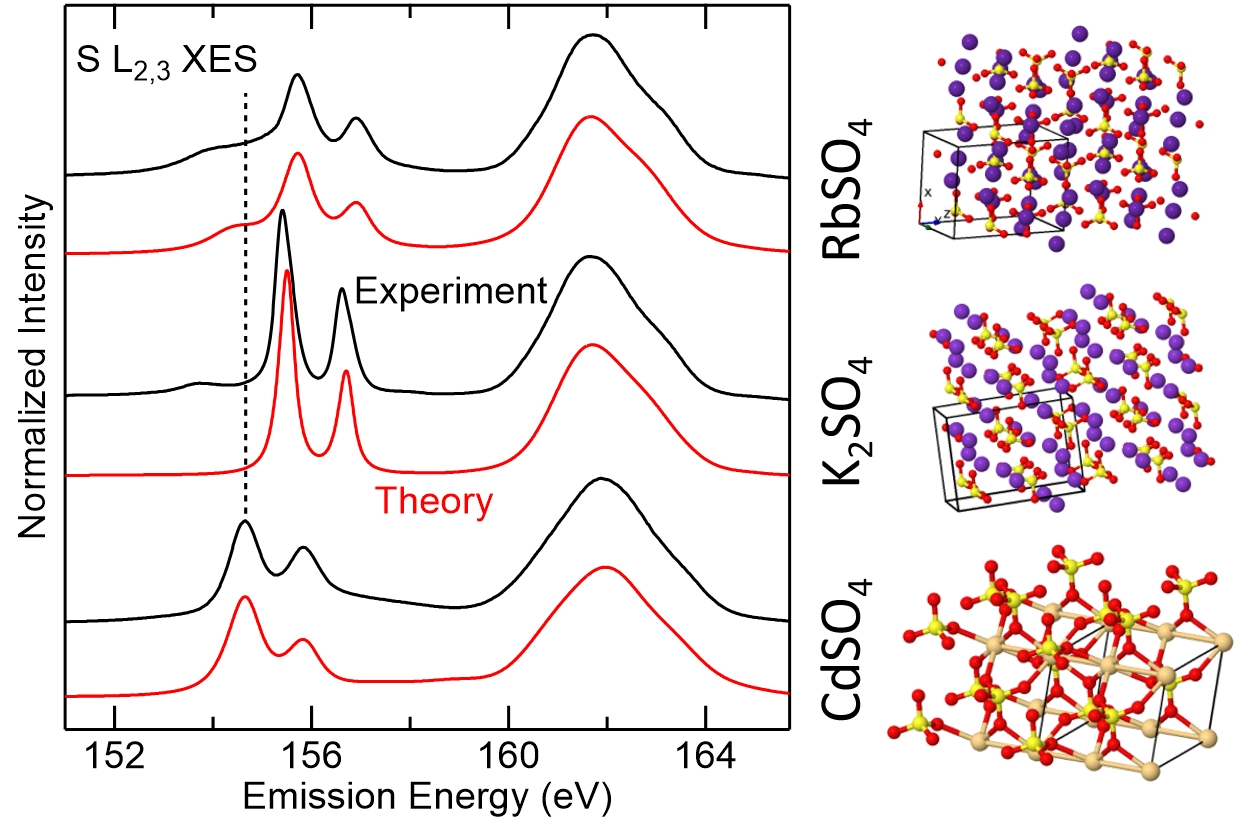 In the present study, the chemical and electronic structures of 15 different sulfates have been studied using soft X-ray emission spectroscopy (XES) at the sulphur L2,3 edge. Subtle but distinct differences between the spectra of sulfates with different cations are observed, which allow a further differentiation of the specific compound. Most prominently, the position and width of the emission from “S 3s” derived bands systematically vary for different compounds, which can be understood with electronic structure and spectral calculations based on density functional theory.