Full-field transmission hard X-ray microscopy (TXM) has been widely applied to study morphology and structures with high spatial precision and to dynamic processes.
Zernike phase contrast (ZPC) in hard X-ray TXM is often utilized to get an in-line phase contrast enhancement for weak-absorbing materials with little contrast differences.
Now, scientists, following forward image formation, derived and simplified the contrast transfer functions (CTFs) of the Zernike phase imaging system in TXM based on a linear space-shift-invariant imaging mode under certain approximations.
Under the assumptions of full coherence and weak-absorbing objects, a high similarity between the two CTFs has been found. The main difference is the modulation factor multiplied to the object-induced phase shifts.

Benefiting from less optical aberrations in comparison to soft X-ray and electron microscopy,the CTF in TXM systems in the hard X-ray regime resembles the one in free-space propagation, which has been widely applied to quantitative phase retrieval. Hence this derivation of CTFs for a full-field microscopic system may be helpful for improvement on quantification of Zernike phase contrast imaging which is strongly desired in life science. 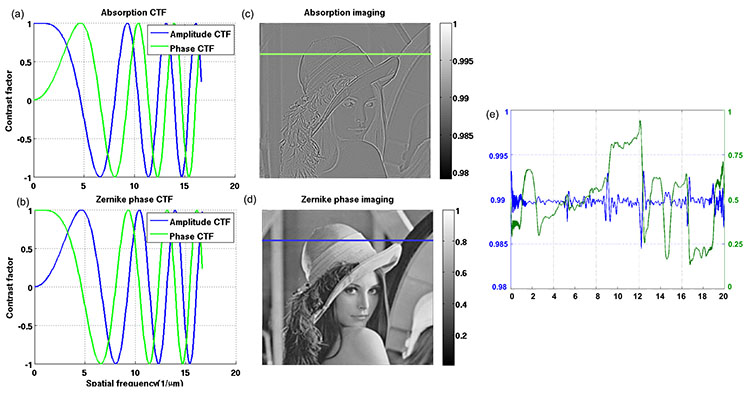 Contrast transfer function (CTF) simulation and comparison between absorption mode and Zernike phase contrast mode in a TXM system. (a) Simulation of the amplitude and phase CTFs under absorption mode with a defocusing distance of 150μm; (b) amplitude and phase CTFs under Zernike phase contrast mode with the same defocusing distance; (c) absorption image of the object, showing merely the edges of the object; (d) phase contrast image of the same object with the large scale features preserved; (e) comparison of line profiles of both (c) and (d).